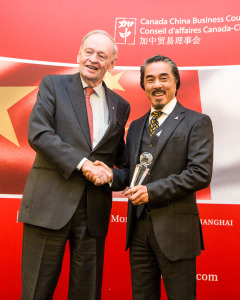 On November 28, 2014, Century was honoured to receive the Gold Business Excellence Award for Chinese Investment in Canada from the Canada China Business Council (“CCBC”). The award was presented at the CCBC Annual Gala Luncheon held in Toronto.

Every two years, the Canada China Business Council presents the Business Excellence Awards to recognize companies that have played an innovative and leadership role in expanding and nurturing bilateral business relationships between Canada and China.  The Gold Award for Chinese Investment in Canada is given to an enterprise that best exemplifies “an organization that has demonstrated ingenuity, success, leadership and commitment involving inbound investment from China, contributing to bilateral economic growth and to the company’s international success.”

The Award recognizes Century’s history of success in solid Canada-China cooperation. It comes at a crucial moment in Century’s history. Ms. Karen Lee, former CFO of the Hong Kong Exchanges and Clearing Limited, has recently joined Century’s board at the September 2014 AGM as a director and Chair of the Audit Committee. In the recently published MD&A attached to its second quarter results, the company announced its new strategic direction to increase shareholder value. Century intends to broaden its public and institutional shareholder base in China through a new trading platform, the Shanghai-Hong Kong Stock Connect linking two of the world’s most important stock exchanges, which officially opened on November 17, 2014.

“We are very honoured to receive this Award.  I would like to recognize our Chinese strategic partners’ investments in Century and our projects, and the unwavering support they have extended to us over the years. This has allowed us to build a company with a strong balance sheet and set our projects on the path for success.  Without the involvement of WISCO, Minmetals and their teams, we would not have won the Award,” stated Sandy Chim, President and CEO of Century.

“We also salute CCBC and its important role in nurturing the good business relationships which create mutual economic benefits for both Canada and China. This, in turn, builds the foundation to address our differences as well as creates a stabilizing force in a volatile world. This recognition from CCBC will help Century continue to build value for our shareholders, and in turn make our contribution to the vital Canada-China relationship.”