Here is our weekly feature covering the gold and copper sectors with an editorial written by an executive of Century Global Commodities Corporation. 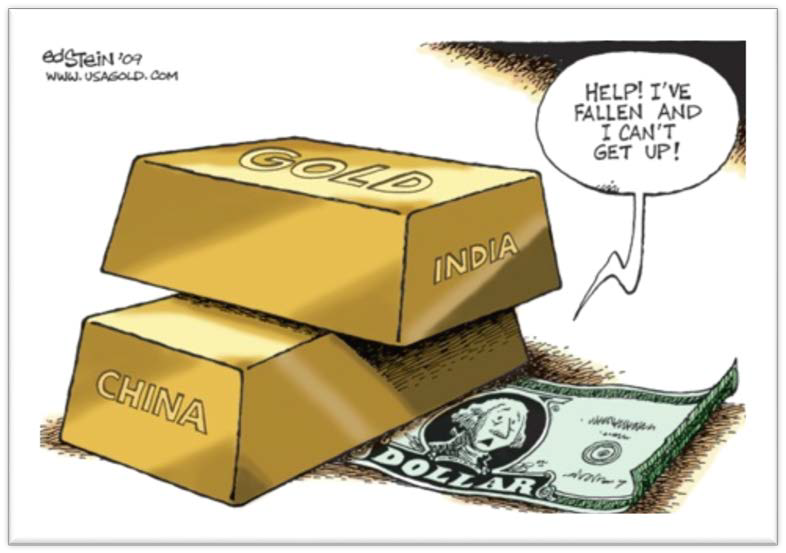 US households have lost nearly $13 trillion since the 2008 recession. Nine years after the financial crisis, the Trump reflation rally is up nearly 10% and U.S. household net worth has climbed an astonishing $93 trillion, reflecting overvaluation of real estate and stocks.

Trump promised to boost economic output through tax cuts, raising tariffs and infrastructure spending, but his post-election tax reform is spreading risk aversion through global markets. The threats are both external and internal.

Congress has raised the debt ceiling some 80 times since 1960, most recently on March 16, 2017.  The prospect of deficit spending, anathema to much of the Republican party, raises the spectre of gridlock on Capital Hill.

The Fed is currently considering how to shrink its crisis-era $4.5 trillion balance sheet, which has created the mother of all debt bubbles. America’s whopping $20 trillion national debt now stands at 100% of GDP, rising to 300% when unfunded entitlements are included. Trump’s ever-higher America First spending and tax reform are a debt time bomb ready to explode.

While the Trump administration focuses on tax cuts, infrastructure spending and deregulation, few are talking about the expansion of his massive budgetary deficit. Abnormally low rates are at an end, but the capital markets have become permanently mismatched, over-leveraged and more vulnerable than in 2007-2008. Our euphoric markets will be caught off guard as both political and economic risks mount.

Foreigners currently own almost half of the $14 trillion US treasury market. Switzerland, Brazil and New Zealand have intervened to reduce their dependence on the dollar. China has introduced capital controls and drawn down its reserves to prop up its currency, expanding renminbi clearing services to Moscow and Toronto.

Nationalism is raising its head in France, the UK and Germany, while currency troubles are exacerbated by the triggering of Article 50, a British election in June, and the possible exit of Northern Ireland or Scotland.

The very real risk of political turmoil in France is scaring holders of sovereign debt. While Italy simmers away, few are watching the biggest threat on the horizon – the United States’ record indebtedness.

China remains unhappy over the deployment of the American anti-missile system known as THAAD to threaten North Korea. Gold is a good thing to have while these superpowers test each other’s will.

Before 1971, the gold-backed US dollar was the foundation of the world economy. The Bretton Woods Agreement ended when President Nixon repealed the gold standard due to the flood of redemptions. The greenback has since lost some 80% against the Japanese yen and Swiss franc and almost 50% against the euro. Although the decline in purchasing power favoured American exports, its status as a reserve currency allowed America to live beyond its means and borrow without consequence by printing money.

However, the dollar is fundamentally fragile.

America’s creditors have been reducing their exposure. After the 2008 crisis, central banks, led by the Fed, adopted quantitative easing and purchased securities to drive down rates, but at the expense of more debt. America’s debt spiral implies a recklessness that will only end one way: default.

China and Russia are leading the effort to reduce their exposure, bypassing the dollar’s hegemony through alternative capital accounts and snapping up enormous stores of gold.

Gold, once used as a universal means of payment, is an alternative investment to the dollar for central banks. China has too little gold and too many dollars; like many others, it is reducing its US dollar reserves and boosting gold holdings. America’s 8,100 odd tonnes of gold has become a target for other countries. Russia purchased 200 tonnes last year, upping its reserves to sixth in the world, behind the US, Germany, Italy, France and China. The Netherlands and Germany have already repatriated their gold from America.

Gold gained 12% year to date, outperforming the market. While the price of gold for some time has been influenced by the flood of paper gold (the latest when 47,000 future contracts were dumped in 2 days), we believe massive Asian purchases, in particular through the Shanghai physical market, will set off a clash and ‘short-squeeze’ as the offside western positions are called.

Banks like the Fed are rarely required to deliver the physical metal. Comex has fewer than one million ounces in its vaults or warehouses to back those 45 million ounces. However, the Chinese are soaking up available physical supplies, raising the risk that Comex will run out of gold, setting up the classic counterparty squeeze.

Last year, withdrawals from the Shanghai Gold Exchange (SGE) reached a whopping 2,000 tonnes versus a paltry 50 tonnes withdrawn from Comex. At a recent lunch cohosted by Maison in Toronto, Mr. Song Yuqin, a senior executive from SGE, disclosed that they and other Chinese institutions have boosted their vault space, implying they will need more storage facilities for clients’ purchases. China is both the world’s largest producer and consumer of gold: Chinese and Indian demand take up almost 75% of annual primary worldwide production. Gold trades at an approximate 17% premium in Shanghai; since April, the Shanghai gold benchmark price has traded at premiums to the London gold fix 60% of the time.

Gold swaps are increasingly used as a sophisticated financing mechanism, in particular to finance the huge Belt and Road infrastructure project. China’s gold business has over 3 million employees; the Shanghai Gold Exchange has 253 members, including 67 international board members, (including Barrick), with more than 10,000 domestic institutions, and more than 9 million individual investors.

China is increasingly influential in the global market, becoming the largest factor in physical trading and draining gold from the West. Last year, it produced almost 500 tonnes. Given its policy forbidding gold exports, China has likely accumulated over 2000 tonnes. Adding it up, we believe, China is fast approaching the 8,100 tonnes held by the Americans at Fort Knox. And then, that gold tail will wag the dog.

CHART OF THE WEEK

Desert Star Resources Ltd. (TSX: DSR) is a gold exploration company based out of Vancouver, Canada. The company explores the gold and copper belts of Southwestern USA, with a focus on its Desert Star Porphyry Copper Deposit (“PDC”) generative program which boasts 30 high-priority targets. Early stage exploration has yielded success, showing favourable alteration with high-grade structurally-controlled copper oxide. The company continues to seek partners to evaluate the targets of interest. 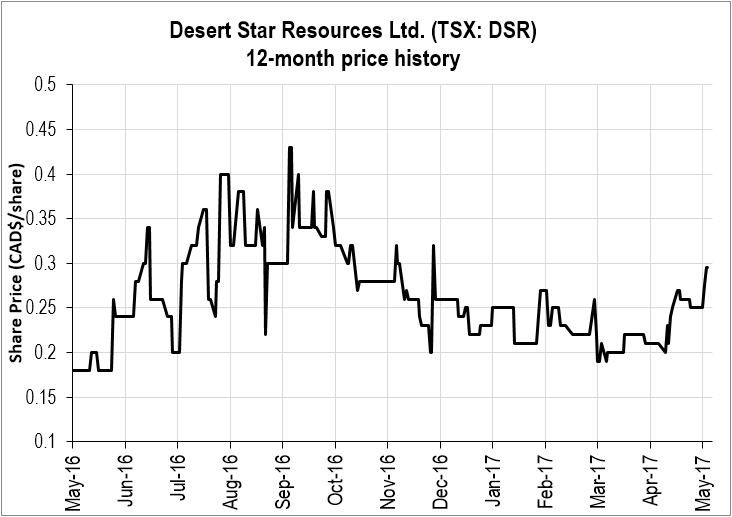 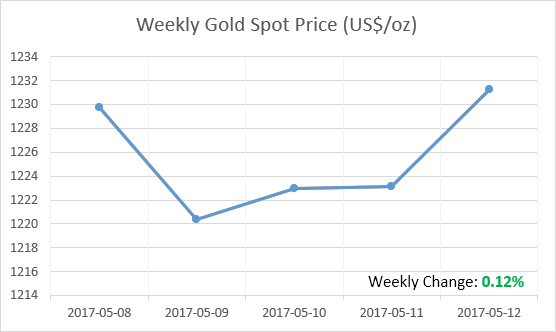 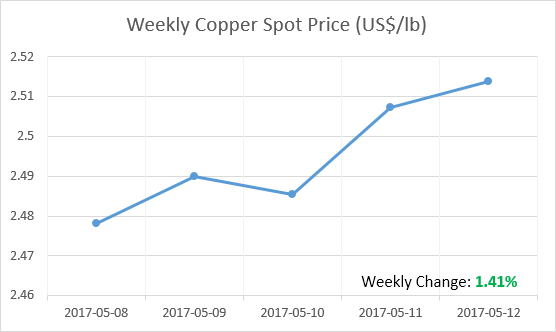 DISCLAIMER
The information contained herein is obtained from third-party sources and believed to be reliable, but its accuracy or completeness is not guaranteed. Any views or expressions contained, unless specifically stated, are not endorsed by Century Digital Network (Beijing) Company Limited or its affiliates (“Century”). Unless otherwise stated, any information provided is indicative only and is subject to change. Century is not liable for any errors or omissions in the content.

Century makes no representation or warranty, express or implied, as to its accuracy or completeness. This publication is for the information of investors and business persons and does not constitute investment advice, an offer to sell or a solicitation to buy securities. No consideration has been given to the particular user’s investment objectives, financial situation or particular needs of any recipient in the preparation.